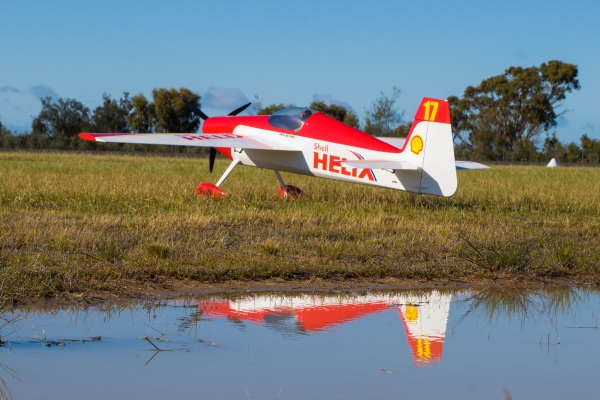 Over 200 balsa wood chuck gliders, provided by the MAAA, were given to the children in the public gallery. Perhaps some young minds were ignited with a fascination for aviation and the magic of flight.

With the help of the 1st Subiaco Scout group over $1200 was collected for at the gate from the 500 spectators who attended the event. “We were surprised to find many ten and twenty dollar notes in the collection tins”, said Steve Maitland as the collection tins were emptied . This amount along with a $400.00 contribution from the pilots was donated to the Royal Flying Doctor Service who use this airstrip to ferry patients to and from the region in need of medical attention.

Spectators came from Albany, Margaret River as well as Perth and as far north as Geraldton. Another group were "grey nomads" who had been touring WA, and were in Wagin by chance. Some came from as far away as Victoria and enjoyed the spectacle. Many of the locals came hearing the sound of the aeroplanes at the airfield, only 2km from the center of Wagin.

Japanese champion, Inoue Junichi won the Freestyle event and wowed the spectators. Many watched openmouthed, saying “I never thought an aircraft could do such things”. Jun was sponsored by Wagin Shire to attend.

Western Australia’s Mark Easton won the precision part of the competition at the Unlimited Class for the second year running. Queenslander, Aaron Garle, who has competed at numerous world competitions and display events in the USA, Japan and throughout Australia, wowed the audience with his freestyle skills and was placed second in the Unlimited Class.

The ASAA awarded Queensland’s Aaron Garle its 2017 Pilot of the Year Award for his aerobatic performance and contributions over the year. David Garle received the "meritorious service award, Cameron Robinson the "Rising Star Award and Flyn Wain the "Junior pilot of the year" award.

The Shire of Wagin has encouraged our Association to make use of their Airfield. Remote-controlled model aircraft and drones are usually prohibited within 5.5km of a full-size Airfield. We’ve had a lot of assistance in getting this event organised, from Civil Aviation Safety Authority approval to Shire support and generous funding from the State Government.

Congratulations to all place getters, especially the winners in all classes and the recipeints of the ASAA Awards.

Another thank you to the Sponsors: TourismWA/Eventscorp, Desert Aircraft Australia, BoomaRC, DLEnglines and Hobby Australia, MAAA and other donor and volunteers.

Finally a special callout to recognize the generosity of the winners of the raffle who donated their prizes to Harry Allison - a young man clearly destined to make a mark in Scale Aerobatics with the help of his dad Dean.

I began R/C flying in about 2000 after a brief foray into RC modeling as a teenager.

I liked aerobatics and always tried to fly what I thought were the maneuvers. I saw Steve Coram fly at an open day at the KAMS field south of Perth. I was hooked, and it all looked so simple. Little did I realize what was to follow in order to fly at a fraction of his level of expertise.

I have progressed slowly but steadily through the ranks despite some unexpected life events. I've attended interstate competitions in Katherine, Bendigo, Barossa and Yenda, until in 2016 I gained three promo points and won Advanced at the ASAA Nationals in Cootamundra.

What I've learned is that the first ingredient is a reliable aircraft which comes down to choosing good equipment and then putting it together so it won't fall apart the first violent maneuvere you make to correct that misbehaving thumb.

Secondly the plane needs to be appropriately trimmed and setup with rates that match your needs. Your setup will change as you need to execute more difficult and finessed figures.

Thirdly you need to read the rules and  the judging guide. Learn to judge by judging others as well as yourself. Modify your stick inputs, modify the travels to iron out your own mistakes. Downgrade what you see wrong according to the scoring criteria. Listen to fellow pilots about what they see, how they judge and appreciate the differences in perception. As you become a better pilot and a better judge your scores will improve despite the ever present inconsistent judging to which we humans are prone.

I am in awe of the intensity and dedication one can dedicate to this sport - all to make flying look so easy.

This email address is being protected from spambots. You need JavaScript enabled to view it.