Gernot Bruckmann (left), a professional radio-controlled aeromodel pilot from Austria, won gold at the 2017 FAI F3P World Championship for Indoor Aerobatic Model Aircraft in France, when it finished at the weekend. The win came after a close-fought week-long competition that was held at the Rotonde Gymnasium in Strasbourg between 19-25 February 2017. 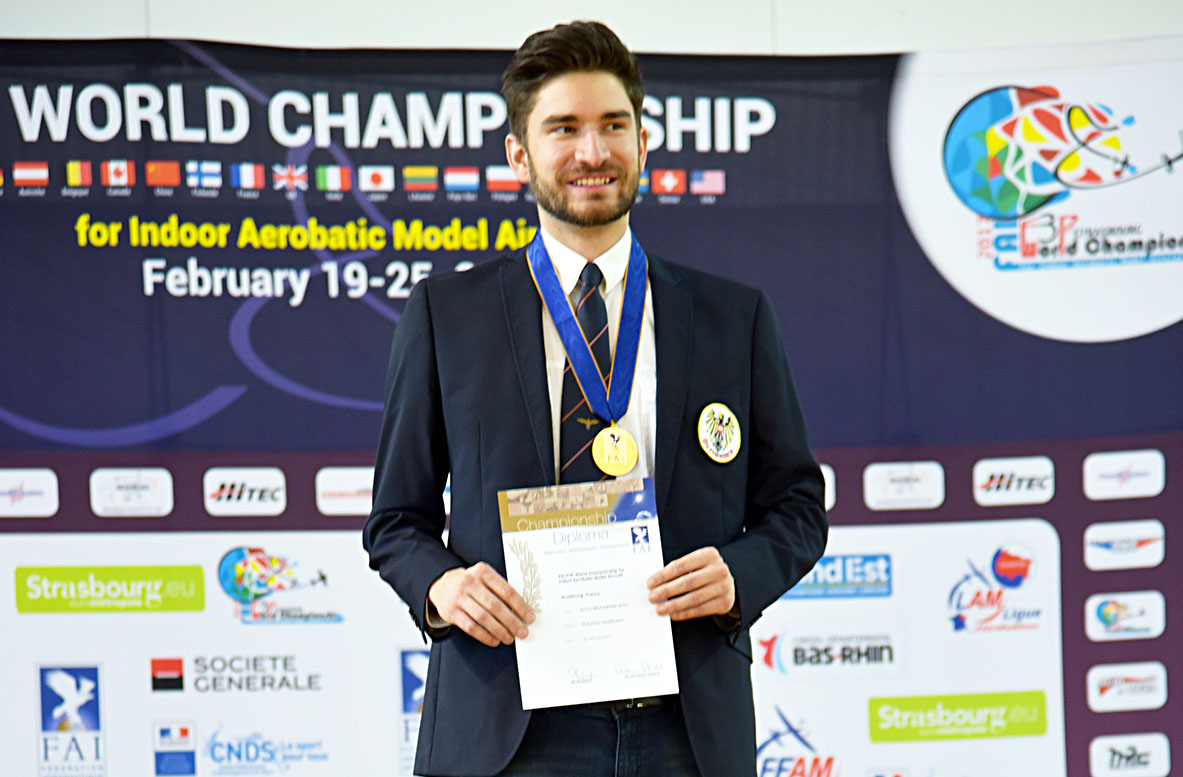 I began R/C flying in about 2000 after a brief foray into RC modeling as a teenager.

I liked aerobatics and always tried to fly what I thought were the maneuvers. I saw Steve Coram fly at an open day at the KAMS field south of Perth. I was hooked, and it all looked so simple. Little did I realize what was to follow in order to fly at a fraction of his level of expertise.

I have progressed slowly but steadily through the ranks despite some unexpected life events. I've attended interstate competitions in Katherine, Bendigo, Barossa and Yenda, until in 2016 I gained three promo points and won Advanced at the ASAA Nationals in Cootamundra.

What I've learned is that the first ingredient is a reliable aircraft which comes down to choosing good equipment and then putting it together so it won't fall apart the first violent maneuvere you make to correct that misbehaving thumb.

Secondly the plane needs to be appropriately trimmed and setup with rates that match your needs. Your setup will change as you need to execute more difficult and finessed figures.

Thirdly you need to read the rules and  the judging guide. Learn to judge by judging others as well as yourself. Modify your stick inputs, modify the travels to iron out your own mistakes. Downgrade what you see wrong according to the scoring criteria. Listen to fellow pilots about what they see, how they judge and appreciate the differences in perception. As you become a better pilot and a better judge your scores will improve despite the ever present inconsistent judging to which we humans are prone.

I am in awe of the intensity and dedication one can dedicate to this sport - all to make flying look so easy.